The morning of the day I went to Mogosoaia was a very special one. I received an invitation to The Biennial of Textile Miniature in Vilnius, where I participated with Unfinished, in 2013. I did not want to go this time, because I’m working on something bigger and I didn’t feel like stopping to do something especially for this exhibition. But I saw the title (Out of the box) and I thought it could be interesting, so I read the description of the theme. Along the already boring idea of thinking outside the box, they also wanted the artist to combine the idea of a dowry box. Hmmm…. that was really… inspiring, because I started working on a miniature that very morning.

The world we are born in is our cultural and social dowry and it is ready-made. So, I took a box, which used to host the best chocolate ever, and some Kinder toys to represent this world. 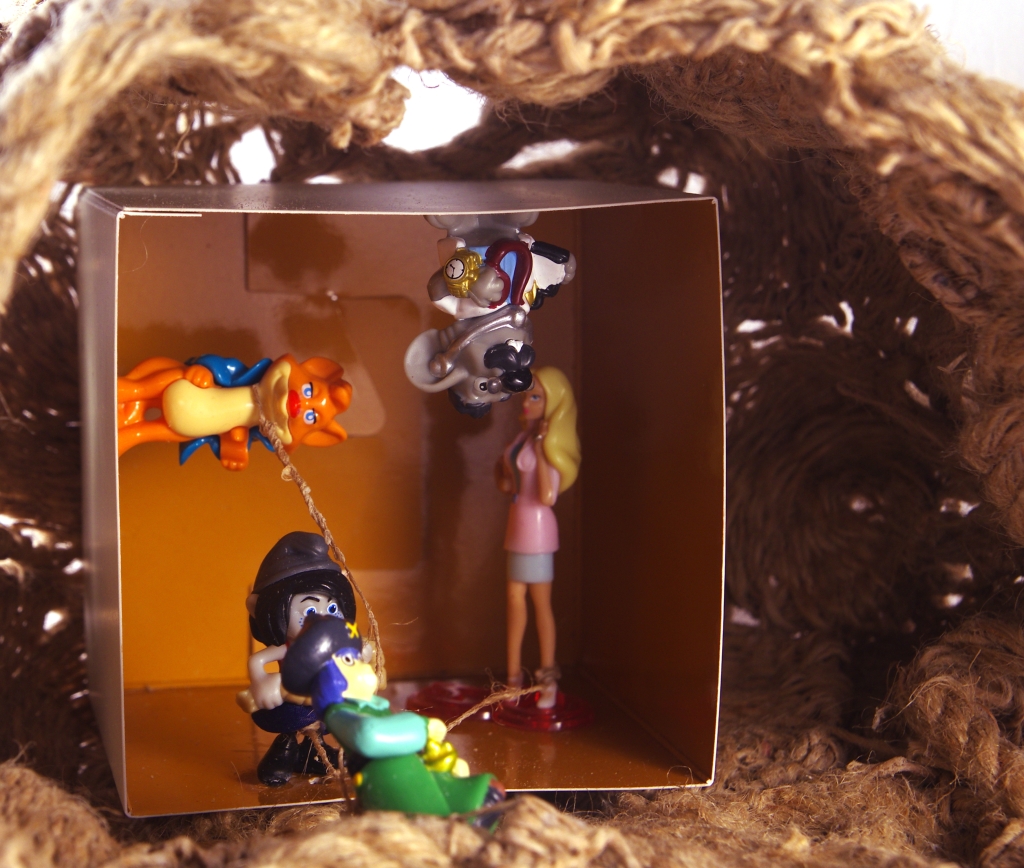 Save for the “doctor”, everyone pulls you back more or less.

But… surprise! When you get out of the box you are born in, you end up in another box. A box you created yourself, but still a box.

You may be wondering what’s with the bird with the heart… well, that is the ideal. I think the ideal should be always outside the box and out of rich. At least for me. Otherwise you get stuck.

The bird was a last minute addition, not something planned from the very beginning, but it goes so well with everything that I had to keep it. 😀 And its story goes like this…

It so happens that I’m having really bad days and a friend gave me a Kinder to cheer me up, because I LOVE Kinders. 😀 Inside, there was this bird. The miniature was done and for whatever reason I placed the bird above it. I felt it belonged, so I kept it. And then I rationalized the choice, because…

The really nice thing is that Alexandra (the friend who gave me the Kinder and who could be a bunch of people judging only by the name because it is so common) told me several times that when she is rich, she will invest in art. Well, you don’t have to be rich to contribute to art! 😀

Before anyone congratulates me, they still need to accept the work at the exhibition (will know after 10th of May), but I enjoyed making it and it was a nice break from my bigger project, which is a welcomed thing, especially now when things mostly do not go the way they are supposed to. 🙂